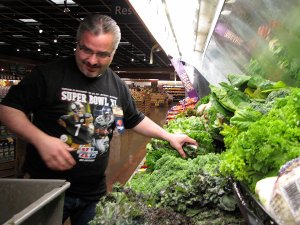 His job at Whole Foods required him to travel to stores throughout the Northwest. Every other week, he’d leave his wife and three young daughters in Bellevue to drive up the Interstate 5 corridor to Whole Foods stores in British Columbia.

As a lifelong grocer, Clougher (his last name rhymes with flour) liked to check out other grocery stores along the way. To him, Haggen stood out.

“When you’re in the grocery industry you’re always checking things out. There are companies thatMore

TONASKET – Two north county residents were injured when a tire blew on their pickup truck and caused the vehicle to rollover about four miles south of Tonasket on SR97.

On Wednesday, Sept. 24 around 6: 30 p.m. the truck, driven by Thomas J. Silverthorn, 19, Tonasket, was heading northbound when the tire blew out and the vehicle lost control. The truck hit the guardrail, rolled over and landed at the bottom of an embankment, according to the report filed by Washington State Patrol Trooper Lovell.

Silverthorn and his passenger, Tyler J. Armstrong, 21, Oroville, were both wearing seat belts at the time. They wereMore

COMMISSIONERS, OKANOGAN COUNTY PUBLIC UTILITY DISTRICT
The Carlton Complex Fire, burning more than 256,000 acres (400 square miles) of land and destroying approximately 300 homes, was the worst firestorm in Washington State history. For Okanogan PUD, the fire destroyed 341 miles of distribution infrastructure, 60 miles of fiber and 22 miles of transmission infrastructure. Power outages in the south end of Okanogan included the towns of Pateros, Twisp, Winthrop and surrounding areas. Approximately 3,600 Okanogan PUD customers and 3,500 Okanogan Electric Cooperative customers were without power. Clearly, this was one of theMore

Bellingham-area foreclosure and mortgage delinquency rates decreased in July 2014 over both the previous month and the same period in July 2013, according to data released on Sept. 30 by CoreLogic.

The rate of local delinquencies at least 90 days late in July 2014 was 2.62 percent, down from 2.63 percent the previous month. Local delinquency rate for July 2013More

Someone told him that once. It wasn’t meant as a compliment, but Wagner accepted the comment with pride.

He sees himself as a plant engineer. A mad scientist. The Johnny Appleseed of tomatoes.

Anything but a businessman.

Perhaps that is why the Everett man, one of the most prolific tomato and potato breeders in the world, remains virtually unknown in the U.S.

His most famous creation — the tangy, striped Green Zebra tomato — is a favorite in home gardens, farmers markets and top restaurants. The tomato was a clue onceMore

The nonprofit Blue Skies for Children, which serves homeless, low-income and foster children, has awarded four driver education scholarships to teens in Whatcom County. The scholarship provides $350 toward a driver education course.  Spring Scholarship recipients are John Banuelos, Leonardo Milian, Jessica Jose and Dominic Valich. Students must be 15 to 17 years of age.  […]

They stopped at various points along 100 Hall to peer into glass cases, at plaques, awards, trophies, citations, perhaps with their names or the names of friends living or dead on them.

Some laughed at the dates, at just how absurdly long ago they had accomplished this in music or won that in athletics, or in other fields.

And everywhere, on sunny walkways between buildings, in classrooms, in the music building, old friends met, did double takes, recognized faces and embraced.

Such was last Saturday’s walk-through of Auburn High School, a last chance for alumni toMore

What is it? Why, it’s the Auburn International Farmers Market, of course.

And at 10 a.m. Sunday, the market pitches boldly into its sixth year, in the Auburn Sound Transit Plaza at 23 A St. SW.

In coordination with the City of Auburn, this year’s market fairly bursts with good stuff, like free performances, chef demonstrations with farm-fresh ingredients, kids activities, and classes on health, nutrition andMore